What is Kings-Day in the Netherlands?

King Willem-Alexander was born on April 27, 1967 and his birthday is celebrated all over the Netherlands. There is a festive day with a street carnival in all bigger cities. Amsterdam is the center of all Kings-Day festivities with many street parties and parties on boats sailing through the canals. There is also a tradition of the flea market in the city center.

Queen’s Day to King’s Day Celebration in the Netherlands?

King’s-Day was previously celebrated as ‘Queen’s Day’, in honor of the successive female monarchs. Queen’s Day national holiday began in the late 1880’s. Before Willem-Alexander reign the Netherlands had decades of the female rules of Queen Wilhelmina, her daughter Queen Juliana and her daughter Queen Beatrix, the mother of the present King. Festivities began as the Queen’s Day before the World War II with the celebration of Queen Wilhelmina birthday since 1949. TweakNews is also celebrating with King’s Day Deal , be sure to signup for their offer.

History of King’s Day in the Netherlands

The tradition of a holiday to honor the current monarch began in 1890. Initially it celebrated the birthday of Queen Wilhelmina on 31 August. 2019 will be King Willem-Alexander’s sixth successive year on the throne since his mother Beatrix’s abdication in 2013. However, 2014 was the first year to celebrate the famous national holiday as ‘King’s Day’, following the coronation of Willem-Alexander in 2013, the first Dutch king since 1890.

How is King’s Day Celebrated?

King’s Day is observed by transformation of the city into an orange sea of carnivals and daytime festivities. To celebrate the royal family of the Netherlands, the Orange- Nassau, everyone who fills the streets is covered in bright orange scarves, hats, and clothes. Everyone comes out to take participation in the carnivals, see free public concerts, or check out the celebratory flea markets. Flea markets are the highlight  of the holiday so you can find ones of all sizes all over the country.

Traditionally, on this day the King visits one of the cities in the country in doing so he meets some of those who have come out to celebrate his big birthday celebration.

Make your Festival fashion statement by Dressing in orange clothes (the royal family are the House of Orange),on King-day  people will celebrate by painting faces and hair orange and wearing mock orange crowns. Be CREATIVE and join the Parties!

A popular pastime on King-Day is going to a flea market. Kings-Day is the only day of the year when the Dutch government allows street selling vat free. Most cities and town take advantage of this opportunity and will host large flea markets (vrijmarkt) with people having saved up their used or unwanted goods to sell.

Tradition of King’s Day in the Netherlands

Celebrating Queen’s Day means dressing in orange clothes (as the reigning dynasty is House of Orange and this is their color), painting faces and hair orange, drinking drinks tinted in this color (or just natural orange juice), wearing mock orange crowns, dressing as the king or the queen and making jokes at the royal family. As some of the jokes may seem to you slightly inappropriate, they express deep attachment Dutch people have to their Royal Family, which seen in the Netherlands as the symbol of national unity. King’s Day is a national holiday in the Netherlands during which everything possible is covered in orange, from flags, wigs and clothing to revelers’ faces: this color honors the royal family, the House of Orange-Nassau. 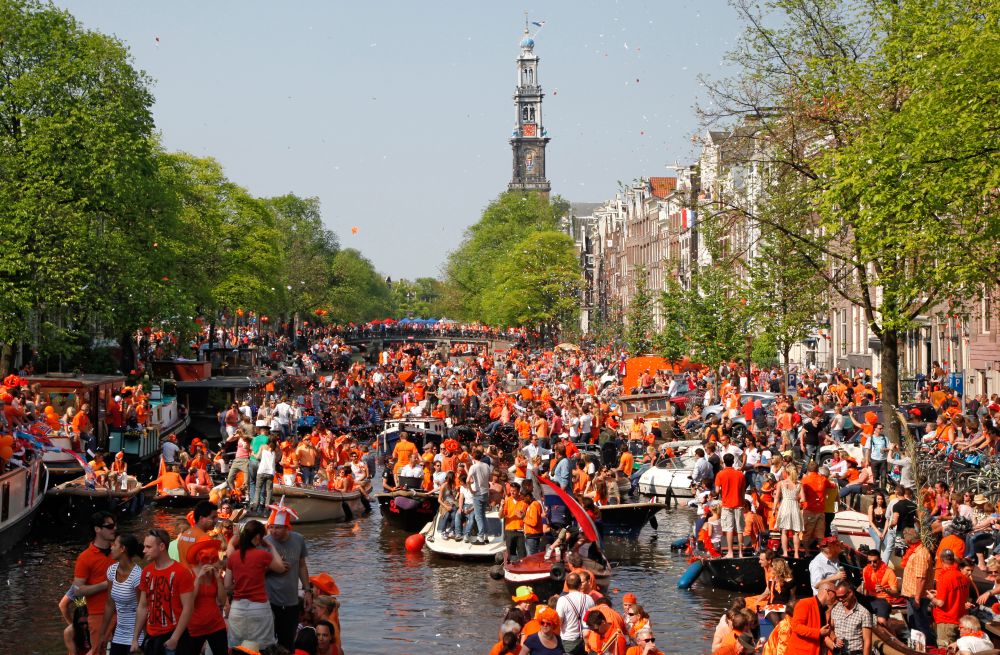 Amsterdam was so crowded last year that the mayor declared the city closed, and people could only get trains out of town, not in. The canals are so choked on King’s Day that you can walk across them boat-to-boat. True? It’s true ….

Most countries with royalty celebrate their monarch’s birthday with ceremony. The Dutch, in contrast, hold a giant open-air market and paint the town orange to celebrate ‘Koningsdag’.

Up to a million visitors descend upon Amsterdam on 27 April every year to celebrate the birthday of the reigning Dutch monarch, Willem Alexander.

With street-corner musicians, DJ booths, and huge, popular parties organized in many cities and towns’ concert venues, the party only stops when the king’s birthday is over.

How Do Royals Celebrate

King’s Day?
Royal-spotting is an important element of King’s Day, and each year they visit a certain part of the Netherlands. Where ever they visit you can follow the entire route through the city. Each year, the chosen city hosts an action-packed day of events for the royals and the public. They will be greeted by children from the city.

Browsing and buying things you never knew you needed (and probably don’t) while wearing an orange wig is the main activity of the day. You can find well-used children’s toys, clothing, chipped china crockery, fish tanks, and much more, all offered at very low prices. Haggling over goods is all part of the day’s fun.

Where to celebrate King’s Day

Most towns and cities have fairground attractions and music events lined up, with many kicking off on King’s Day eve, or King’s Night (Koningsnacht), on 26 April. You will find an array of DJ events and parties held around the Netherlands. will feature some top Dutch and international DJ’s.

Koningsdag is also the one day of the year that singers and bands are actively encouraged to set up on each street corner to give the public their all by singing ‘traditional’ Dutch ballads.

Dive right into the hedonistic indulgence of drink, music, and the search for a bargain you never really wanted. If you feel really brave, you could have your face painted orange to help blend into the local King’s Day scene.

Amsterdam is the busiest city on Kings-Day, as over a million visitors join the residents in street haggling, partying and dressing in orange.  You’ll also see Amsterdam’s canals packed with Kings-Day revelers on boats. If you aren’t yet a guest on a boat, you can maximize your chances by hanging out canal side in the hope of being invited aboard!

Most countries with royalty celebrate their monarch’s birthday with pomp and ceremony. The Dutch, in contrast, hold a giant open-air market and paint the town orange to celebrate ‘Koningsdag’.

With street-corner musicians, DJ booths, and huge, popular parties organized in many cities and towns’ concert venues, the party only stops when the king’s birthday is over.

How to Celebrate King’s Day